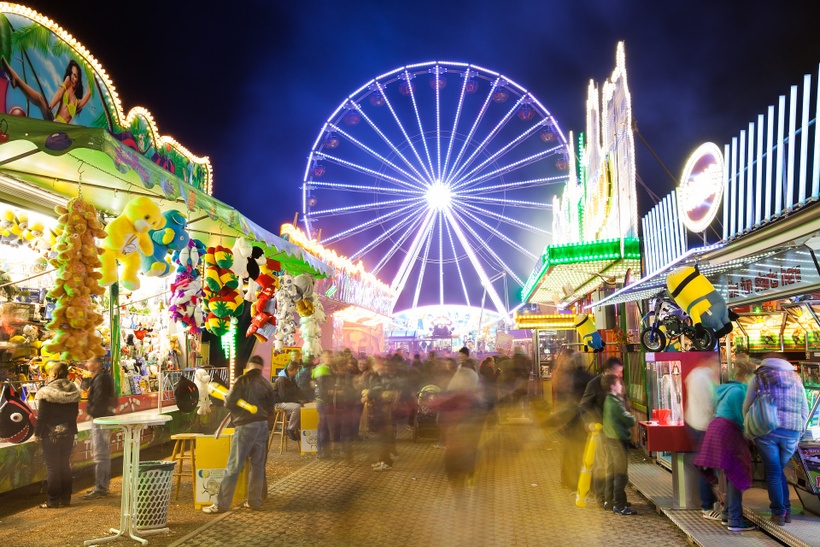 “What do you mean, you want to go back there?”

Ramsay lifted his head from where he lay on the other end of the couch. His eyes were sleepy but bright. Mischievous. Callie didn’t like the look in them. They’d spent the whole day having a horror movie marathon, complete with beer and popcorn, and though the alcohol was long out of both of their systems, Callie still felt pleasantly relaxed—or at least, she had until Ramsay proposed his asinine plan.

“I want to give it another shot,” he added.

Callie shook her head. “He stood you up. You were pissed. You said so yourself.”

“I know what I said. Can’t a guy change his mind?”

“A guy, yes. You, no. You never change your mind, Ram.” Callie dragged a hand down her face. “What did he say to you to get you all worked up?”

“It’s not what he said so much as how he said it. I’d show you the messages, but I’m not proud of some of the pictures I sent.”

Callie rolled her eyes. Going back to that carnival was the last thing she wanted to do. After waiting in the ticket line for hours and the food line for close to half an hour, the lead-up had definitely not been worth the payoff. All she could think about was the hurt in Ramsay’s eyes, the reek of alcohol on his breath as he cursed beside the petting zoo. She really didn’t want to see him like that again.

The red and yellow friendship bracelet Becca had made him encircled his wrist. He played with the ragged ends of the knot as he spoke. “I’m fine, okay? I know you’re worried about me, have been worried for a long time, but Cal… I promise I’m all right.”

She wanted to believe him, she really did. Truth was, he had come a long way since his sister’s death. From wallowing beneath a mountain of blankets and surfacing only to eat and take a piss to going out in the world on a regular basis, his progress was unmistakable.

But Ramsay showed signs of recklessness, of the kind of risk-taking that Becca would have hated, had she still been alive. She had always been worried about him. Now that she was gone, Callie had inherited that concern.

She thought about a time when they were younger, around the second grade. They’d been playing in a vacant lot, summer sun beating down with a shimmering fist. Ramsay climbed to the top of a dirt mound, egged on by Callie. Becca watched in fear, begging him to get down—and Ramsay jumped. He seemed to stay in midair, fixed by some unseen force—before he slammed into the earth and his arm snapped with a violent crack. He had broken it in three places and needed surgery.

That was not the only evidence of Ramsay’s recklessness that she had on hand, but Callie didn’t care to dredge up the others. One was more than enough. Her concern for him had only increased.

“Callie,” Ramsay pleaded. “Come on. You know I can’t drive or I’d go by myself. I’ll pay for your gas and everything.”

Callie wanted to argue that if he really wanted to go so badly, he could walk, but she didn’t have much fight left in her. If she let him go by himself and something happened, she would never forgive herself.

Reluctantly, Callie stood and picked up her keys from the bowl on the coffee table. “Let’s go before I change my mind.”

This time, when they arrived at the carnival, they didn’t have to wait in line. It was later in the evening, well after dark, and fewer people seemed eager to venture inside. Callie was relieved they didn’t have to wait again. It was bad enough that she’d had to come back here against her will. If she’d had to stand in line again, too, she didn’t think she could have tolerated it.

Ramsay had fidgeted in the passenger seat on the way to the carnival, tapping his fingers on his thigh and bouncing his leg to the beat of Rob Zombie’s “Dragula.” He hadn’t said much to Callie, either. Now that they were at the carnival, he was even more animated, although less talkative. His eyes darted all around them, never fixating on any one point for too long.

“Are you high or something?” Callie asked once they were through the turnstiles.

“What? No.” He scoffed at her. “I only did coke that one time, remember? Nothing before or since.”

“I’m just nervous, I guess.” He peered down at his thumbnail, but he didn’t lift it to his mouth to bite. “I told him we wanted to go through the haunted house first.”

“Well, all three of us.” Ramsay shot her an apologetic look. “I dunno, I’m just… I feel weird because he stood me up yesterday, and then today he acts like nothing’s wrong. Wanna make sure I’m not getting catfished or something.”

“Jesus.” Callie sighed, though maybe she should have expected something like this.

“You coming or what?”

Callie shoved her hands in the pockets of her jeans and stared down at her red Converse as they headed toward the haunted house attraction. She hated that she was pouting, but damn it, Ramsay was being ridiculous. He’d made her an accessory to his bullshit crusade, and all she wanted to do was get back in the ass and leave his ass at the carnival so she could go home and get some sleep. To his credit, Ramsay said nothing as they walked. Maybe he knew better than to press his luck.

A long, low whistle caught Callie’s attention as they neared the attraction. She stopped alongside Ramsay, lifting her gaze to meet the whistler’s. He was a tall Black man with hooded brown eyes, close-cropped hair, and a row of golden earrings all along his left ear. He arched an eyebrow and grinned at Ramsay like the Cheshire cat.

Something in his smile made Callie’s blood run cold.

As nonchalantly as she could, Callie tugged on Ramsay’s sleeve. He ignored her, continuing to stare at the hot stranger. This must have been the famed Jabari.

Without further hesitation, the man came closer to them. He reached them in a few long strides, and his speed set Callie’s nerves on edge. He was still beaming at Ramsay, but the smile left his eyes as he turned his attention to Callie. “You must be the friend.”

Callie bristled. “And you must be the asshole who stood Ramsay up last night.”

Ram. Callie was the only one who’d ever called him that, and hearing the nickname in some rude man’s mouth was a slap in the face. Her eyes narrowed, and she tugged on Ramsay’s sleeve again, not letting go this time. He had to know that she meant business.

“She’s doesn’t get out much,” Ramsay said. Callie could have smacked him. He kept looking Jabari up and down like he’d never seen a hot guy in his life, and it drove Callie up the wall. She was half a second away from going off on both of them when Jabari leaned in and pressed a kiss to Ramsay’s cheek—and then her best friend blushed.

Imagine if Becca could see him like this, Callie thought. Happy, after so much pain. An ache bloomed in her chest and she let go of his sleeve. They could talk about this later.

“Jabari. Good to meet you.” He didn’t offer her anything more than a nod, taking Ramsay’s hand. “Shall we head inside?”