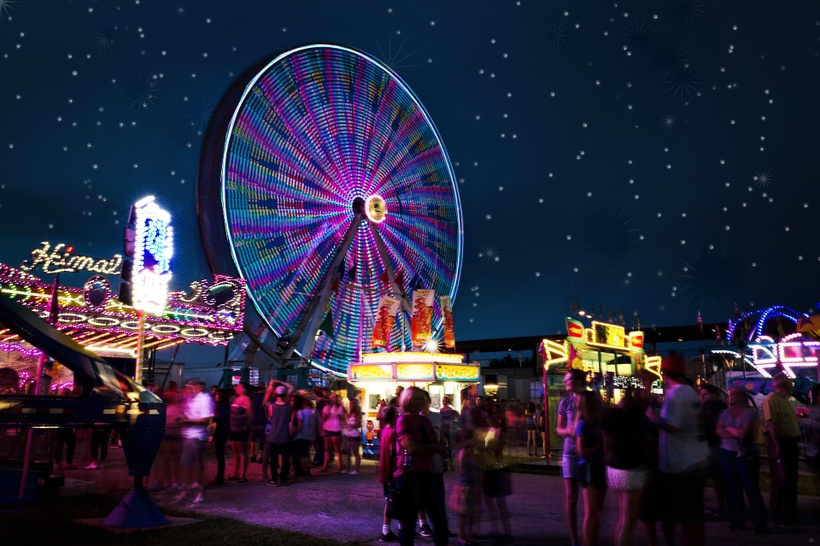 Callie’s eyes narrowed. “It’s worth getting mad about?”

Ramsay huffed. “Now I really don’t want to tell you.”

“Now you really have to.” She crossed her arms. “We decided a long time ago, we don’t keep secrets from each other, remember? Best friend code. So, spill it.”

Ramsay held her gaze for a few moments, saying nothing. Callie stood her ground, wore down his defenses enough that he deflated like a sad balloon, shoulders slumping as he spoke. “There’s this guy.”

Callie had never seen him like this, so caught up in someone new. Or, at least, in the prospect of someone new. He was usually so confident. Whoever Jabari was, he must have really been something. It also wasn’t like Ramsay to meet up with some guy at a carnival. He liked jocks usually, the ones that wanted nothing to do with him and would only agree to a quick blow behind the bleachers before football practice.

At least, that was how it had been for him in high school. Now that both of them were in their twenties, Callie assumed he’d raised his standards. But maybe she was wrong.

“Any reason why he didn’t want to meet you at a restaurant or something?” she asked.

“Said he didn’t have enough time off, and he’s not really a foodie.” Ramsay rubbed the back of his neck. “He… works here, actually. Part of the carnival.”

“You’re into a carnie? Holy shit.” A passing family with two children shot Callie a look at her colorful language, but she shot one right back at them. This was Neap Bay, not the Midwest. She’d heard worse words at two. “Ramsay… please tell me this dude isn’t on drugs or anything. A tweaker could knife you.”

“Oh, that’s reassuring,” Callie said, rolling her eyes. Ramsay wasn’t naive, but he didn’t have the best judgment, especially when it came to hot guys. She recognized his failing because she was the same way, just with girls. They usually called each other out on shit like that, and she couldn’t help worrying that he’d put himself in another awful situation.

Ramsay didn’t answer her. Instead, he pulled his cell phone out and scrolled through his text messages. Somewhere nearby, a car backfired. Callie flinched. It sounded like gunshots, and her nerves were wound like a coiled spring. She couldn’t help it—something about the Starlight Carnival gave her the creeps. And the darker it got, the more convinced she was that something bad was going to happen.

“Says he’s over by the haunted house,” Ramsay said.

Callie looked around. All she saw was food stalls, the Ferris wheel, a carousel, and a row of carnival games. If she squinted, she thought she could make out two buildings about a football field away. The fairgrounds were massive.

“I think that’s on the other side of the carnival,” she replied.

“Let me get some food first.”

He lifted a hand to his mouth and chewed his thumbnail. “Don’t really need a chaperone, Cal. Why don’t you stay here, get some food, maybe hang out for a while? I’ll text you when I’m free.”

Annoyance pricked her skin. “You’re the one who invited me to come here with you.”

“Wait.” She touched his shoulder. “I’m assuming you invited me because you didn’t feel safe or something. Why would you ditch me now?”

“He says it’s fine,” Ramsay said. “He said… well, he asked me not to bring anyone with me. I can’t show up with you in tow. It’ll look like I don’t trust him.”

Ramsay exhaled. “I don’t know, okay? What I do know, though, is that I haven’t gotten laid in like, seven months. This guy is hot, he wants me, and that’s good enough for me.”

Callie shook her head. “He could stab you.”

“Anyone could stab me. And the longer I stay here with you, the more I feel like you’re the one who could snap.” He offered her a smile to soften his words. “Look, if anything happens, I’ll call or text you. Scout’s honor.”

Callie chewed the inside of her cheek. Typically, she’d bust his balls about something like this, but the buzz of the crowds and the electric atmosphere had lifted the hairs on the back of her neck, and she was too focused on wanting to get her bearings to argue with Ramsay, or to give him a hard time. Besides, her stomach was still growling. She needed to get some food.

She studied Ramsay’s face for a minute. His blue eyes were warm, imploring. A little sad. She knew he needed the boost. More than anyone she knew, he deserved it.

His sister Becca’s face flashed into her mind, and her chest ached. She brushed the pang of grief away and gave Ramsay what she hoped looked like a sweet smile.

“You gonna be safe?”

He whipped a condom out of the front pocket of his shirt, and Callie laughed. With another grin and a kiss on her cheek, he turned and headed off in search of Jabari.

“We share the same weakness for pretty boys.” Becca’s voice nagged at Callie’s consciousness again. “Only with Ramsay, I worry it might get him killed.”

Callie’s eyes burned, and she pressed the backs of her hands against her eyelids to keep the tears at bay. Becca would’ve hated seeing her like this. She had been the crybaby; Callie was the strong one. Ramsay was the mediator, feeding off whomever’s energy was stronger at the time. The follower. The empath.

Not for the first time, Callie wondered if her anguish fed his own, if her failure to properly grieve her friend’s loss and move on was making things worse for Ramsay. She got in line at the food stall, tabling the thought. She knew she had to let herself fully feel the sadness, but the carnival wasn’t the best place to do that. Right now, she needed funnel cake and Coke to chase her pain.

“Shit,” came a voice from behind her. “You’re bleeding.”