Reader beware, there be spoilers ahead. If you haven’t seen Squid Game yet, I highly recommend it. Go watch it and come back here to read this when you’re finished. Don’t say I didn’t warn you.

Many people have described South Korea’s breakout hit Squid Game as Black Mirror meets The Hunger Games. While I agree with this analysis, I also think it’s worth examining how the show falls into the horror genre. To me, it functions as accessible horror for a more cynical mainstream audience that might not think they’re interested in horror. Squid Game is horror because it juxtaposes a vivid setting with violent content, drills down to center on the human element, and follows the path of a tragedy—complete with a tragic downfall.

Let me break it down. I’ll start off with a summary of the show. While this article will share spoilers, I’ll give you plenty of warning for them. Here is just the show’s premise, so no worries just yet. According to IMDB.com, “Hundreds of cash-strapped players accept a strange invitation to compete in children’s games. Inside, a tempting prize awaits with deadly high stakes. A survival game that has a whopping 45.6 billion-won prize at stake.”

If you’re curious how this show became such a big hit, I’m not covering that here. Countless articles and video essays have already done that. Besides, you follow me for horror, so that will be my focus. I will just mention that Squid Game is chock-full of nihilism, anti-capitalist commentary, and existential dread and go from there.

The Importance of Setting 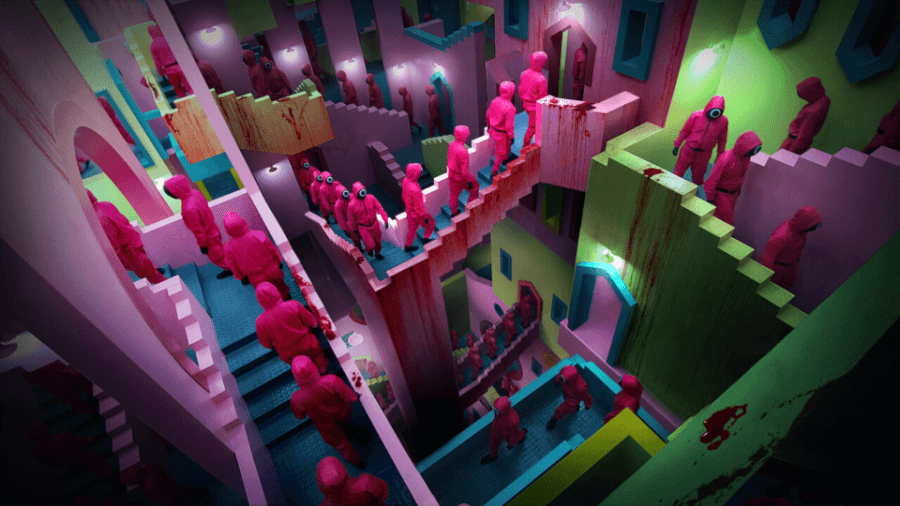 First off, I want to talk about how effectively Squid Game juxtaposes a vibrant setting with graphic content. Outside the game world, we’re presented with bleak, often rainy scenes of everyday life. Prior to Gi-hun (Player 456) joining the game, he lives in a squalid apartment with his mother, fights with his ex-wife, fails to buy an acceptable gift for his daughter, and barely scrapes by. With such a dismal tone, you’d almost expect the violence and conflict to happen here—but it doesn’t.

Full disclosure, there is a scene in which a machine mangles a manager’s hand, but it happens quickly, and Ali doesn’t reflect on it. The more prevalent, upsetting violence happens in the competition.

From the first episode, we witness the backdrop of the games as bright, open spaces, colorful meandering stairways, and faceless workers in hot-pink jumpsuits. All the games the contestants compete in are traditional Korean children’s games, including Red Light Green Light, Honeycomb, and the titular Squid Game. In the first game, Red Light Green Light, the players try to reach the finish line without being caught by a giant doll-like robot. It seems like this will be a simple game. However, once the game starts, we soon discover its sinister secret—when a player loses, an attendant kills them. Later, pink-suited attendants will place their bodies in coffins and cremate them. When this happens, it comes without warning and piqued my attention.

“Jesus Christ,” I said to my partner. “This shit just got real.”

As the games progress, the setting’s color and brightness do not diminish. For the Glass Bridge, players make their way across the bridge against an expansive backdrop of wide, open space, glaring lights, and dazzling colors. In this game, the scenery is so extravagant that the VIPs watching even comment on it. And, for the very last game, the Squid Game, Gi-hun and Sang-woo face off in the same space as Red Light, Green Light. Sang-woo even reminds Gi-hun that they have come full circle. Squid Game’s self-awareness of this bright-setting-violent-content juxtaposition helps it succeed as horror.

Next, let’s explore Squid Game’s focus on the human element. Anyone who has read my work knows I love character-driven horror. I like a slow burn with personal stakes and flawed people you still root for. Although there is violence and gore in this show, it’s not about the violence. It’s about the players. At the beginning of the show, Gi-hun is an asshole. He lives with his mother and doesn’t help around the house. Nor does he pay alimony or child support to his ex-wife. In fact, he’s so bad with money that he bets it all on a horse race, gets robbed, and has to buy his daughter a gift from a claw machine. He doesn’t seem to care too much about anyone but himself.

With each new character, we get a taste of a similar backstory. Everyone who competes in the games needs the money desperately. They yearn for a blank slate and the fresh start that winning the games present. And even though every character is flawed, we can’t help rooting for them. Sang-woo sucks, but there were parts of the show I rooted for him, too. The writing is phenomenal. 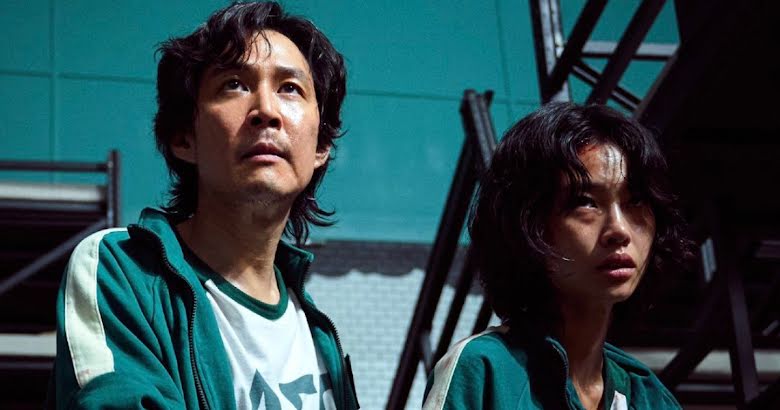 Last, Squid Game follows the path of a tragedy—complete with a tragic downfall. Even several tragic downfalls. This falls in line with my previous point on the human element. Since we grow attached to the characters throughout the games, we can’t help hoping they come out on top. As more players die each round, the tension stretches taut until it becomes almost unbearable. Only three players remain after the sixth game, including Gi-hun, Sang-woo, and Sae-byeok. We’ve already witnessed Sang-woo’s tragic downfall. The stakes climb higher when Sae-byeok’s displays her injury and pay off when Sang-woo “mercifully” kills her. This cruel act further cements his place as a tragic figure.

In the last game, the Squid Game, Gi-hun goes up against Sang-woo and tries to hold on to his humanity. He appeals to Sang-woo’s nostalgia by mentioning their shared childhood. Sang-woo kills himself. Gi-hun has won, but at an insurmountable cost. He receives the full payout, but it doesn’t change his life as he expects it to. In the aftermath of the games, he discovers that his mother has passed away. His daughter and ex-wife have moved to the United States. He has plenty of money, but the one thing he thought he needed is something he no longer wants.

A year later, we learn that Gi-hun hasn’t touched his winnings. His unkempt appearance and depressed demeanor betray his mental and emotional state. It’s hard to see him struggling after having overcome so many trials in the competition. Still, more upsetting surprises are in store. He stumbles upon a man playing the same game he played with the mysterious businessman at the beginning of the show. He confronts the player and discourages him from playing the game. When an old woman asks Gi-hun to buy flowers, he does—and finds a gold card with an all-too-familiar logo and a personalized message attached.

The old man from the games survived, and he wants Gi-hun to meet with him. Although the old man is indeed dying, he’s been in on the scheme from the start. While orchestrating the competition, he realized he couldn’t remember the last time he’d enjoyed his life. He decided it would be more fun to take part in the games than to watch them, and so he entered as Player 001. When Gi-hun tries to get more answers out of him, the old man asks him to play one last game—and passes away before Gi-hun gets any kind of closure. This ending left me with a foul taste in my mouth and sympathy flooding my veins. It’s difficult to watch someone go through trauma without getting a genuine payoff.

Netflix’s Squid Game is a perfect pick for spooky season. It makes horror more palatable to anyone unsure of where to start with horror. Although the show contains some graphic scenes, I think most people should be able to handle it. Squid Game is a number-one hit in over ninety countries. Give it a watch and discover what all the fuss is about.

What did you think about Squid Game? Do you think it works as horror?